Ok, so this could be the cutest Frenchie on the internet! BUT, there seems to be alot of debate if its a Frenchie at all.

Meet Dougie and Burnie. These little furry ewok types have started popping up and causing quite a stir. Firstly, let me point out that our Facebook page only lists purebred French Bulldog puppies (for now) however these guys are sooo cute we had to post about them.

There’s been a whole lot of expert opinions, well, you know, keyboard warriors claiming these guys to be purebreds.

Let me say this. Just because you read something on Facebook, doesnt mean its true…

“the breeder says its a purebred”;
“the owner has said its pure, just a rare recessive long hair gene”;
“Its a purebred, cos there’s pedigree papers that state that”;

Not that I would ever suggest that breeders sometimes tell fibs (errrr), or that pedigree papers are, well, known to be not always accurate (omg), but these little bundles of awesomeness are actually cross bred puppies! Fact.

Burneys DNA test determined that the cross breeding happened several generations ago, and the exact cross species was not clear, however many breeders particularly in Europe have started creating these gorgeous wookies and, well, we kinda love them! – I can hear the French Bulldog club purists just frothing right now

Dougie, the black lion-like puppy, was sold as a Frenchie-X on Trading Post for just $2500 in Sydney recently. The breeder explained he has Japanese Chin in his bloodlines. Hmm, nice Eurasian mix!

Okay – So, the cross breeds look like a Frenchie, some think they are even cuter than a purebred Frenchie, they are a fraction of the price – last litter sold locally was advertised for $2000 per puppy, and we all know that a cross bred ‘mutt’ will be genetically superior to a purebred puppy. So.. Cheaper, healthier, and in many peoples eyes, cuter! Would you consider adding one of these cute ewoks to your family? We would!

The practice of cross breeding tends to cause some controversy in the dog world. On one side, breeders of purebreds tend to consider these dogs nothing more than mutts. On the other side, proponents of crossbred dogs maintain they are adding vigor to the genetics of breeds they believe have been bred too closely for generations. Which side is right? That can be difficult to determine. However, there are advantages and disadvantages to the practice of cross breeding, and it’s good for potential dog owners and breeders to be aware of them.

Advantages of Cross Breeding? First, take a look at the positive aspects of cross breeding. People who are strictly interested in purebred dogs often overlook these points. Unique Look – Some people prefer a dog that doesn’t look like any other breed they know, and cross breeding can certainly produce such a dog. When you combine two different breeds, it’s a coin toss as to how the genetics will combine. This means that each puppy in a litter can look different from its littermates, and this can lead to a very interesting-looking litter.

Being a cross doesn’t automatically mean the dog won’t make a good pet. Proper socialization and training will bring out the best in any dog’s temperament and behavior. Will a wookie Frenchie have the same temperament and social skills a purebred Frenchie is known for? We don’t know – but these owners may say its even better!

Congenital Issues – It’s true that many purebred dogs suffer from genetic conditions that have been passed from one generation to the next. Careful cross breeding may lower the chances of passing on a particular condition if only one parent is a carrier.

Keep in mind that many of today’s purebred dogs were founded on crosses of different breeds, and they have been refined through selective breeding to produce the consistent characteristics they display today. This new ewok cross-breed may become foundation for a future pure breed. Some of today’s crosses could potentially evolve into tomorrow’s pure breeds if breeders organize themselves and follow a specific plan to make that happen. The Cockapoo is one example of cross breeding that demonstrates this potential.

Now it’s time to consider some of the potentially negative aspects of cross breeding. Many cross breeders downplay the significance of these points, but they are still worth considering. Pure breeds have been developed for different purposes, and their temperaments match those purposes closely. For example, Rottweilers tend to have bold and sometimes aggressive temperaments because they have been bred to be working guard dogs. Poodles were bred to hunt and be wonderful family companions. It would be difficult to predict the exact type of personality a cross breeding between these two dogs might produce.

From a pregnancy perspective, breeding dogs of different sizes can sometimes lead to difficult deliveries. This is especially so if the stud is much larger than the bitch, or he comes from a large-headed breed. A bitch of different breed may have more difficulty pushing the puppies out, and she may require a C-section in order for her and her puppies to survive. Although this is common amongst French Bulldog breeders, cross-breeding with a stud of larger species could be catastrophic.

Congenital Health Issues – Many congenital health issues, such as hip dysplasia, eye diseases, epilepsy and kidney disease, are found across multiple breeds. This means these conditions are still likely to show up in crossbred pups if both parents are carriers of one or more of the same genetic problems. It would be interesting to determine the various recipes to create this furry Frenchie and evaluate improvement of health and genetics.

With all the interest in “designer dogs,” some mixed breeds go for $2,000.00 or less. The average purebred French Bulldog puppy often costs between $4500.00 to $6000.00 unless it’s an extremely popular or rare colour where you can expect to pay 5 digits.

Do the disadvantages really outweigh the advantages? It’s very difficult to say, and that only fuels the controversy. In the end, cross breeding dogs is a lot like breeding purebreds. It’s important to select only the healthiest dogs with the best temperaments to use as breeding stock, and then make sure that each puppy produced goes to a permanent, loving home.

What are your thoughts? Would you be interested in a furry Frenchie-X puppy?

PS: We have no relations to breeders of these Ewoks just yet. But if you’re interested in a purebred Frenchie puppy, pls join our newsletter for our next litters: http://eepurl.com/bgs5wD 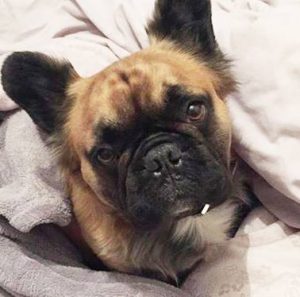 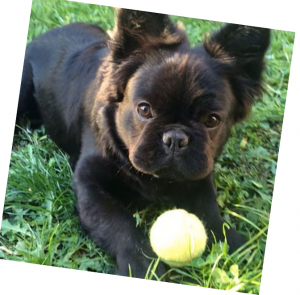 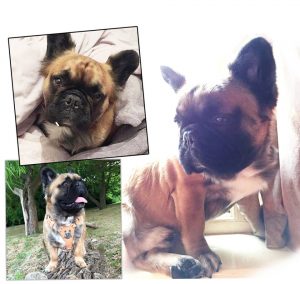