Mirror Mirror on the wall,
Who’s the fluffiest Frenchie of them all?

This is Dougie, one of the most talked about Frenchies on the planet right now!

He’s extra fluffy, almost wookie, and super awesome! We’ve written about Dougie and other wookies in the past, but across the universe there’s still crazy debate about his pedigree (original post here or on our Facebook page)

So let me set the record straight. Despite what you read on Facebook, or Instagram, or the cryptic notes from the owners themselves, Dougie is a cross breed. He is NOT a purebred Frenchie, and there’s nothing wrong with that, but the ongoing emails we receive and the ridiculous debate is really just a sign of people wanting to believe!

He does not have pedigree registration papers, and its not a rare mutant long hair gene from some ancient Frenchie DNA as described across Facebook.

Dougie was advertised and sold through Sydney’s Trading Post for $2500 as a French Bulldog cross. Ive attached the original advert below. He has siblings who are also as cute and fluffy as him. His sister is a beautiful fluffy pied.

The breeder, who I have spoken to a number of times, explained Dougie’s grandpa was a Japanese Chin, thus the long hair that has popped in the generations to follow. The breeder said they were sold without pedigree papers, which sounds right, however there’s claims he has pedigree papers and a dna test that proves his purebred, although no one has ever seen them (because they dont exist!).

Now, for the 100’s, and 100’s of enquiries we get on these fluffy long haired wookie Frenchies, NO ONE is breeding them. The breeder of this litter has explained she wont be doing it again and wants to focus on purebred Frenchies going forward.

SO Dougie and his fluffy siblings will remain the unique superstars that they are, for now…

Join the conversation on our FB page. And you can find Dougie on instagram! 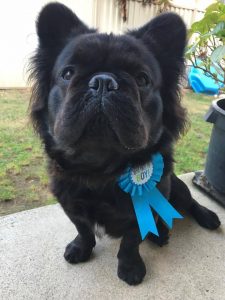 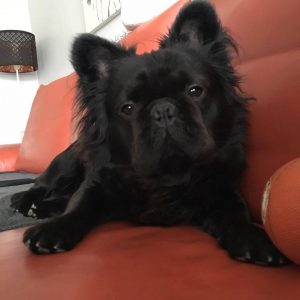 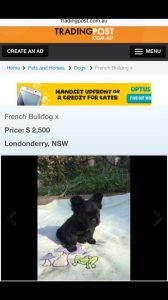