Here’s a photo of a beautiful fawn male that is also a show ring “Champion”.  I came across this photo recently posted as a champion show dog and stud available to sire. This is a Showring Club breeder and no relation to this page.

If you look closely at the nostrils of this adult Frenchie, you can easily see that the pinched nostrils are literally closed shut, and may be an example of Brachycephalic Airway Obstruction Syndrome.

These stenotic nares are a fault in accordance with The Breed Standard, the blue print that registered breeders follow, and this Frenchie shouldn’t be bred with registration. But they will, and they are, and Im sure the offspring may have closed nostrils too. I just hope they tell potential buyers of the problems and correction costs to allow these beautiful treasures to have the comfort of life they deserve.

I receive emails about price every day. In fact 10-20 times per day. The most common question is where to get the cheapest Frenchie. Let me say this, if you are struggling just to get to the purchase price, a Frenchie may not be for you. Trying to find a breeder thats $1,000 cheaper could end up costing you $10,000 more in the first year!

They are are problematic breed which require alot of attention, specific food and diet, and ongoing costs which can far exceed the purchase price, especially if they develop allergies, spine or hip problems, breathing issues, or if you purchased a line bred Frenchie (a terrible inbreeding practice by many breeders incl many French Bulldog Club breeders) etc, all which are common issues. This is evident by the cost of insurance. Petplan charges 5 times more to insure a Frenchie than other dogs.

Living near the beach, my vet recently told me that 9 of the 11 local Frenchies (3 are show dog champions) have had leg operations. Some have had both legs done. At a price of between $3-$6000 per leg. This is due to the rigourous knee strain caused by soft sand. (BTW, the same vet has a practice in the CBD also where the results are exact opposite, only 1 in 12 required surgery – no soft sand in the CBD).

But there are a wide variety of issues that haunt the French Bulldog breed. Breathing is one of the big issues.

Last year, my own French Bulldog puppy underwent a simple procedure to repair his soft palate. Though a little bloody and a bit painful, my then one year-old puppy came through brilliantly.
Within 24 hours he was good as new – better, even, for his ability to breathe (almost) like a normal dog. But too few squishy-faced breed owners opt for this simple surgery.

I always loved bulldogs, but thought I’d ever own one. I’d seen too many train wreck cases suffer the multiple abnormalities that are inherent in their breed (due to unchecked breeding practices).
I now have three Frenchies, I love them dearly, and because I have the means to care for them, I can live with their shortcomings knowing they’re better off in my home than in most others.

Short-faced (brachycephalic) bulldogs (and many other blunt-faced breeds) have small (hypoplastic) windpipes, closed up (stenotic) nostrils, excess oral and respiratory tissues clogging their airways, dwarfed limbs with abnormal joint angles and spinal abnormalities (leading to severe arthritis), a predisposition to obesity, and often suffer severe skin allergies, to boot, which makes them prone to infections in all the deep skin folds they possess.

For the record, Frenchies fare much better than English bulldogs in almost every aspect of their health. I strongly recommend that bulldog lovers consider this breed over the English variety. Although puppy mills and backyard breeders seem to prefer to breed Frenchies, so their genetics are often warped. This makes for likely orthopedic issues, too.

I tell everyone who is not dead-set on spending lots of cash in vet bills, running high AC bills, and working daily on hygienic ministrations to stay far away from these breeds. Yet the Frenchie variety is one of the most popular breeds in recent years. Some clients buy them to breed them, figuring they’ll make a bundle of cash, before realizing that small litters with likely, expensive C-sections and a lower-than-normal survival rate (for the mum, too) is a poor choice for an entrepreneurial endeavor. To make matters worse, too few owners are willing to undertake the necessary procedures required to make their bulldogs comfortable: daily cleanings, arthritic management, allergy testing and treatment, and surgeries to open their airways or remove redundant skin when necessary.

To properly care for a Frenchie, soft palate resection is perhaps the most necessary procedure, dramatically improving their comfort level. When dogs can’t breathe well because this long, droopy piece of surplus flesh clogs the opening to the larynx, it’s a must. If it’s not removed, the fleshy soft palate gets ever-droopier as they age, worsening their respiratory symptoms. Here’s a visual primer:
Brachycephalics snore more (experiencing disturbed sleep), get hotter in simple situations (like taking a car ride), and can even suffer heat stroke when excited, anxious or over-exercised. Even a walk down the block in Bondi, for instance, is impossible for some of these guys. Consequently, their joints hurt more with the weight they inevitably gain and the muscle mass they eventually lose.
It’s a common cycle that’s rarely reversed, even by vigilant, hard-working, responsible owners. Few people are bulldog-worthy; they assume these problems are part of having a short-faced breed –– and thus explain them away. Worse still, some consider the rasping breath and the snoring as “cute”, and many show breeders will mate closely related dogs to get an even squishier nose for this cosmetic appeal.

Last year, my first Frenchie was neutered and had his soft palate shortened at the same time. We also took the option of widening his nostrils. You should know that a specialist should always perform this procedure unless a GP (general practitioner) is specifically trained for it and takes on many resections a year.
He had better and wider nostrils than his Frenchie buddies in our area, and did not require surgery, but our vet & surgeon discussed the many long term benefits so I opted to proceed.

** Note: Ive seen so many Frenchies with nostrils that are practically closed shut – something to check when buying a puppy ***

Before and after pic: 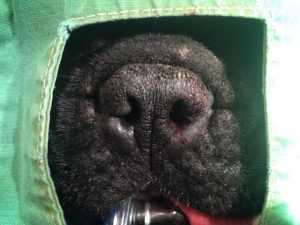 By the time he woke up, my little mate was feeling pretty groggy but his breathing was already markedly improved. His typical rasp was gone and he seemed minimally put out by the whole thing. There’s something to be said about the well known gentle demeanor, here. They recover very well from anesthesia –– with careful monitoring to ensure their airways aren’t clogged by their large tongues and other tissues upon awakening.

If you have a bulldog or a pug, you should know that you almost certainly need to ask your veterinarian about this procedure. Yet even vets don’t always get it. To be sure, the surgery’s not cheap, but our planet’s supply of “free” oxygen is priceless to your dog.
The soft palate & nostril surgery costed just over $1000. The results were absolutely dramatic. The surgeon explained his air intake has improved by 200%, and it showed from the moment we got home. He was able to swim about 10 times further without puffing, and went from struggling to get around the block, to running around 5-10km per day with no more panting. All that extra oxygen has allowed him to keep cooler, remove snoring and grunting, and now stops to smell every flower when walking.

If youre going to buy a Frenchie, ringing hundreds of breeders to try and save $1,000 should be the very least of your concerns! 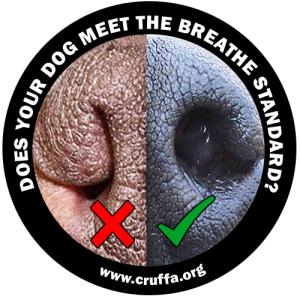