Because they are frikken idiots!

You do not need to be a professor or master biologist to know that breeding grandma with grandson just isnt right! Not morally, not ethically, not genetically. But it’s legal! Ridiculous!

Not only is it legal, some of the Dog Clubs defend this gross practice. In fact, brother and sister matings were allowed by the canine registry up till recent years until they finally bowed to overwhelming public pressure thanks to the RSPCA, BBC News, & Pedigree Dogs Exposed exposing this madness! Only very close matings have been restricted – Grandpa and granddaughter matings etc still allowed.

In response, the French Bulldog club has published a very carefully worded explanation of Line Breeding and its benefits – I’ll let you decide.

What concerns me most is that there are breeders giving advice stating that in some circumstances (how they decide this I will never understand) that mating related dogs is a good thing. Hmm. One well known show judge and dog breeder even has a website & blog called “The Beginners guide to Inbreeding”. 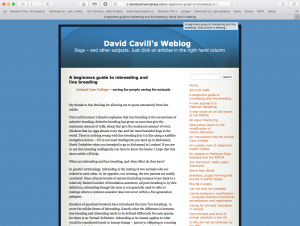 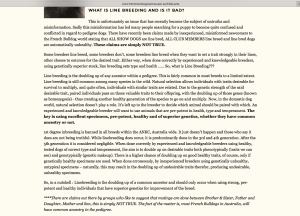 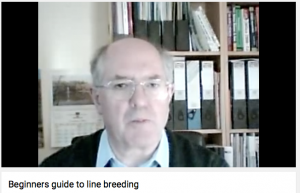 Who inbreeds? Well, Im guessing now with all this exposure and negative publicity many of those breeders may deny it altogether. Then again, they are so proud of their Line Breeding, they will defend their right to inbreed vigorously and those breeders may instead try and convince you of its “many benefits”.

Typically it will be show dog breeders. And there is alot of them ‘into’ it. The show ring is an out dated, old fashioned and out of touch organisation and full of obessession. Mark Evans, a chief vet at RSPCA has publicly stated many times he would like dog shows abolished and a complete overhall of the system. Despite overwhelming scientific proof that inbreeding is just bad bad bad, there is still this large number of breeders that claim to know better.

Tip: When checking pedigree papers of puppy parents (if they are legit) showing the family tree history, you may see the same Sire or Dam on both sides of the tree, mutliple times. So your proposed puppy could have one dog who was both dad, grandad, and inlaw, maybe of both parents. This gets very twisted!

Here’s what the RSPCA think.

Inbreeding is the mating of related individuals that have one or more relatives in common. Linebreeding is a form of inbreeding.

What is close inbreeding?

Close inbreeding is the mating of close relatives. The closest form of inbreeding in domestic animals involves matings between full brothers and sisters (full siblings) and between parents and offspring (collectively called first-degree relatives). The offspring from first degree matings have a significantly increased risk of suffering from an inherited disorder.

The second closest form of inbreeding involves matings between grand-parents and grand-offspring, half brothers and sisters (half siblings),  uncles/aunts and nephews/nieces, and  double-first cousins (collectively called second-degree relatives). Second degree matings are the second closest possible form of inbreeding. The offspring from second degree matings also have a substantially increased risk of suffering from an inherited disorder.

The more closely related the parents, the greater the chance of their offspring suffering from an inherited disorder. This is because when animals are related to each other they are far more likely to be carrying the same defective genes. When these defective genes pair up in the offspring, inherited diseases can occur. Inherited diseases can cause significant suffering and reduce quality of life particularly where the disease causes pain.

Linebreeding is a term commonly used to describe milder forms of inbreeding. Typically it involves arranging matings so that one or more relatives occur more than once in a pedigree, while avoiding close inbreeding.

Note that many dog breeders apply the term “inbreeding” only to close inbreeding, despite the fact that linebreeding is a form of inbreeding and has the same effects.

Why should inbreeding be avoided?

It is scientifically proven and widely recognised that, on average, the effect of inbreeding/linebreeding is:

1. An increase in the prevalence of inherited disorders

2. A decrease in viability

3. A decrease in reproductive ability, and

4. The loss of genetic diversity (i.e. decrease in genetic variation).

What is RSPCA Australia’s position?

Given the overwhelming scientific evidence, RSPCA Australia’s position is that both first degree (e.g. father  to daughter) and second degree matings (e.g. grandfather to granddaughter) should cease and as a general rule, matings should be arranged between parents that are as unrelated as possible and are also physically and behaviourally sound. By mating unrelated parents, there is a significant reduction in the risk of the offspring suffering from an inherited disorder.