The French Bulldog breed standard does not allow certain colours for main registration and are labelled undesirable or not accepteable, and for very good reason. Blue French Bulldogs are genetically affected by Follicular Dysplasia. Black dogs may carry dominating K genetics (more about that later) but why white? White born puppies should be sold or given as pets only, and main registration is not permitted, well, not legally anyway.

White dogs and extreme pieds can be problematic. Extreme white can often cause problems when it removes large amounts of pigment from the face and ears. The most common problem is deafness (due to lack of pigment in certain parts of the inner ear, which prevents it from functioning properly), but dogs with exposed unpigmented (pink) skin are also more prone to skin cancer than those with more pigment.

Extreme pieds, ie mostly white dogs, are also linked to the deaf gene and its not uncommon for extreme piebalds to have blue eyes, which is a genetic defect linked to adult blindness and specifically noted in the breed standard as not desirable.

Unfortunately, in Australia, many white and extreme pied French Bulldogs are incorrectly advertised as creams, which has become quite confusing for pet buyers and newcomers and to this beautiful but complicated breed.

Note: All of these health issues above are not present in a True Cream Frenchie..

Below an advert on Gumtree selling a “cream”. Definitely not a cream. And some comments from Facebook show & club breeders to re-assure this advertiser however they continued to market & sell as a ‘cream’. 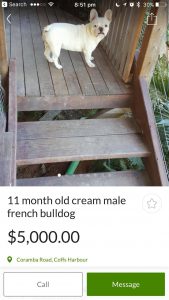 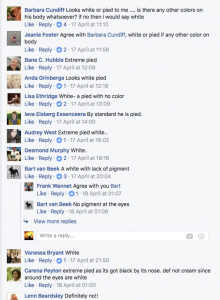 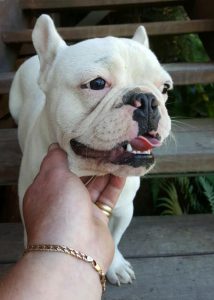